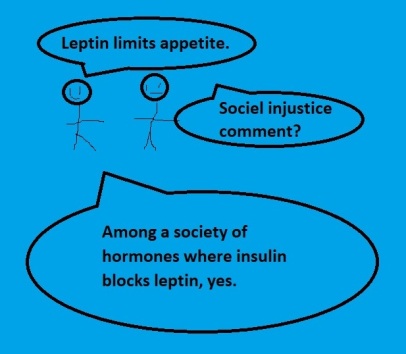 The issue is that modern medicine does not determine if you are nutrient deficient.  Modern medicine is more interested in using drugs to give immediate relief and not the long-term solution of healing. And then, the side effects of the drugs kill you. The need for drugs must be driven by a large market of ill people. The sugar addiction/fat elimination has provided this opportunity.

When I was growing up on the farm, I used to eat five to eight thousand calories per day.  This was necessary for the long arduous hours spent in labor.  Most days were sixteen-hour days. With this high intake of calories, imagine the amount of nutrients that I was getting.  Of course, there was not any processed food.  It all came from our efforts in the garden, pasture, hunting, and fishing. Even the bread we ate came from the wheat that was grown on our farm. Our cash crop was tobacco, but my parents were smart enough to forbid us from using it.  In a sense, we were just like modern medicine in not embracing what gives us health. Instead, we embraced a healthy farm economy. America was founded on the income of tobacco and alcohol. (This link is an interesting story about the interaction of my family, over several generations, with alcohol. Published at the Dead Mule School of Southern Literature.)

In my ten thousand-or-so hours of research, I have found that we are all deficient in most minerals and vitamins. I, like Linus Pauling and Hippocrates (a couple of millenniums of understanding), have concluded that all chronic disease comes from nutrient deficiencies.  The number one chronic disease in the US is obesity. I am fat as a hog raised on molasses feed just waiting for the slaughter.  I’m am addicted to the evil of processed sugar in its many forms.  We have created this epidemic of chronic obesity though our efforts in reducing fat.  I don’t believe that the researchers thought fat was bad for us. I believe that the money derived from a sick population was very addictive. It takes a large sick population to have twenty percent of its gross domestic product to be from medicine.  (Simple explanation of how increased sugar intake produces more insulin which blocks leptin and causes us to eat too much by Dr. Robert Lustig, UCtv.)

We have recently discovered that insulin increase blocks our hey-we-are-full hormone, leptin.  We have found that eating any dense carbs and sugar increases appetite. How long have we known this bit of extremely important information for our health? Leptin suppression was useful when we were hunters and gatherers as we gained weight that allowed us to live through the lean times. The Inuit tribes knew best as their major calorie source was fat. Linus Pauling in the 1970s with his studies of prisoners (complete control of food source) knew that fat did not increase cholesterol, that sugar was the primary reason for the increase.

Even though I’m a fat hog, my health is great. I did one of those test for actual age and came out at mid-thirties. Not bad for a sixty-six-year-old. It is all the vitamins and minerals that I use through supplementation. Now that I understand the insulin/leptin response, the avoidance of sugar and flour are prime in my diet.  However, this elimination of an addiction is going to be difficult.  I just recently went on the Whole30 diet and lost twelve pounds in a month. My body functioned just fine without addictive items.  In this diet, you eliminate grains, alcohol, dairy, and legumes for thirty days. I discovered that I was lactose intolerant during the trial. How many addictions and allergies do you have?  Stay tuned as I begin the journey of a healthy diet. –Pandemic Survivor (Can I escape the obesity epidemic? Present BMI 29.5 – 6-2, 230)