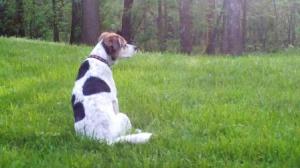 Our dog ages and we know the inevitable outcome. It is a trip to the vet and a long sad time after the dog has passed. However, it may be possible to extend the life of your dog. Our dog Sophie, 13, had a really tough time in the spring of 2014. It began with a urinary tract infection and resulting liver and kidney issues. After increasing the amount of vitamin D, sulfate as MSM, NAC, and changing the type of food she recovered. However, she was not the playful dog that we had known. In late November, we begin to supplement her diet with two sprays of Metadichol on her food. She has now returned to her old self and has become very playful. Also, as I have described in an earlier post, her lipomas are shrinking.

Last article, we reported the findings of Dr. Joe Marasco and his experience of Metadichol with his family. Now , here are his comments about experiences with his dogs and Metadichol. Read my other articles on Metadichol by selecting that category. – Pandemic Survivor

My wife and I adopted our son’s dog named “Miles” about 6 months ago in January 2012, as our son was moving into an apartment that had a dog restriction. Miles is about 9 years old, and is a beagle and corgi mixed breed, 30 lbs., and a very mild mannered, non-aggressive and loving dog. His tests for Lyme disease have been negative. We treat our dogs as family members, and want to make sure that they have a safe and comfortable life in our household.

Miles had what appeared to be arthritis in one of his hind legs, and would get around by hobbling on his other three legs about 75% of the time, but the condition appeared to be worsening. His other hind leg was also giving him problems. He did not run. Upon taking him in, we thought his health would steadily go downhill to the point where he would need to be euthanized. We were expecting to have to proceed with that unpleasant event within a year.

I started giving Miles two small doses per week of Metadichol about two months ago. The doses were about one-fourth of a teaspoon of your liquid formulation, mixed in his normal food. There was no hesitation on his part to eat the dosed food, thereby suggesting that he was not able to detect any adverse odor or flavor.

Almost immediately, Miles’ activity level picked up. Where five months ago he would not be able to take a walk on a leash outside, he now actively is walking, running, and jumping. He now greets me by standing up on his back legs! He looks forward to daily walks.

I was told by his vet at a recent checkup in June 2012 that, exact quote: “there is nothing currently wrong with his joints.” When playing with other dogs outdoors (we have four dogs), he is able to run and keep up with the fastest.

This is a startling turnaround in his behavior, and friends and family who know Miles are stunned by his transformation. Only a few months ago was a dog that had to slowly limp to his water bowl is now outside chasing squirrels like a hound, and outrunning his younger peers. If nothing else, your product has given a new lease on an active life for Miles. 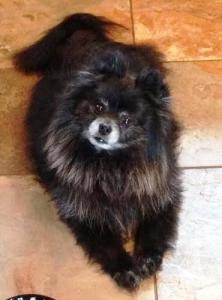 Tazzy is a 14 year old Pomeranian with the kindest and most expressive disposition out of any of the many dogs we have raised. People say that he should be brought to nursing homes to snuggle and cheer up the residents that have little outside contact with the world. This photo is of Taz just as he was starting to become ill. It’s worth taking a close look at the expression in his eyes.

Taz’s kidneys had started to fail. We found this out after noticing that his behavior had changed from the frisky, bouncy, perpetually-moving, little ball of fur to a depressed and constantly tired shell of the dog he once was. This change happened over a one month time frame. Taz was brought to the vet for blood tests, which then confirmed the beginning of kidney failure. This was a death sentence, which we had sadly seen with a couple of our dogs in the past. The only realistic path forward leads to euthanasia. Usually the dogs with failing kidneys begin to sleep much more than usual, and lose any liveliness they usually have. They appear to be in constant discomfort, and begin to refuse to eat. Taz showed all of these symptoms in the matter of a few weeks, and lost so much weight (almost two pounds off of an eight pound dog!) that his ribs became prominent and were easily felt even under all of that fur. At the rate of this decline, it looked like that final trip to the animal hospital would be upon him within the next month.

With knowledge of the human responses seen with patients that had been treated with Metadichol, Taz was given a daily dose of about 3 mg in solution, sprayed onto his food each morning. On the third day after treatment started, a miracle in the making became apparent. His tail wagged again for the first time in weeks. He ran again for the first time in weeks. After one week of treatment, he began to act hungry once again and his food consumption doubled. Now, after 4 weeks of treatment, he is acting normal once again, is hungry like he should be, and runs and plays with the other 3 dogs, his “cousins,” that live in the same home with him. More blood tests will follow and we will compare the data.

If nothing else, with or without test data, it became obvious just after the third day of treatment that this tiny, gentle and loving dog was actually behaving like he felt better. Much better. Just this effect alone is incredible. I bet Taz would agree. You can see it in his once again wagging little tail. –Joseph M. Marasco, Ph.D.

Dr. Marasco, CEO of Diffinity Geonomics, is responsible for business development and company operations. Prior to joining Diffinity, he served from 2007-2012 as CEO and board member of Chiral Quest Corp., a US headquartered fine chemical and active pharmaceutical ingredient manufacturing firm. Dr. Marasco has served in several other leadership roles in both early stage and publicly traded firms including Dow Chemical and Beckman. He led the launch of Coenzyme Q-10 as a nutritional supplement in the US during the 1990’s while serving as Director of Kaneka’s pharmaceutical division (the original manufacturer of Q-10). He earned his Ph.D. in organic chemistry from University of Virginia, and was awarded a postdoctoral fellowship in Biochemistry at the Walter Reed Medical Center.

We have had three dogs during our thirty plus years of marriage.  Our second dog was a beagle named Maggie (Maggie May or Sister Mary Margaret or Flange).  She was a wonderful spirit, and was hard headed as most beagles.  She loved to howl at almost anything and took great pride in scaring off the mailman and all delivery trucks.  At the age of four, she had a ruptured disc.  During the early nineties, this was considered a death penalty for a dog.  We took her to the veterinary school at NC State University.  There she had one of the first back surgeries for dogs ever.   Of course now it is common practice to do surgery on dogs with a ruptured disc. 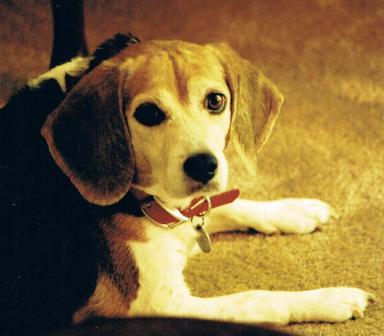 She did very well after the surgery and made a great companion for our daughters.  However, when she reached the age of ten, she started to have a lot of pain and did not display any joy in life.  Our vet suggested that we should put her down.  I had just discovered the benefits of vitamin D at the time and so we started to supplement with vitamin D3.  We also had gotten a mixed breed dog that we named Sophie (Sophie May, Sophia Maria, black and spotty pretty princess puppy, or Peggy Sue).  It was a rebirth for Maggie as she played like she was a puppy again.  She lived with great joy for another five good years after we started the supplementation. 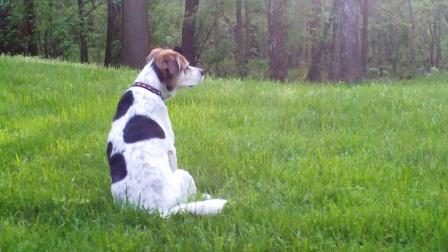 Her heart failed suddenly as she was flying across the yard to see my wife that just returned home.  It was like one of the chambers of the heart just stopped functioning.  We had to put her down, but she did enjoy five years because of the vitamins.  Old age comes to everyone and eventually death, regardless of how healthy we live.

Dogs, just like their human companions have learned to live inside without sunshine.  This is a problem as we do not get enough vitamin D.  We either have to supplement or determine a course of action that will allow us to get enough UVB rays.  So how much vitamin D is enough for dogs.  We treated Maggie just like she had a human physiology and gave her between 20 to 40 IU per pound of body weight per day (at twenty pounds this was 400 to 800 IU per day).  She thrived at this level of supplementation.  We also gave her sulfur supplements as chondroitin sulfate, and glucosamine sulfate.

Toxicity has long been a problem with dogs with vitamin D and it has to do with manufacturing errors in making dog food.  There was recently a case in Spain where there was too much vitamin D put in the dog food by Mercandona. The typical type of error is in the units for vitamin D.  The toxicity level in which half of dogs will die or LD 50 is 88 mg/kg (40mg/lb) in a single dose.  Clinical symptoms of vitamin D toxicity in dogs have been found as low as 3 mg/kg or 1.3 mg/lb.  But you just said 40 IU per pound per day was the correct amount?  Here is the error issue.  Forty IU for vitamin D3 is equivalent to one microgram.  Yes that’s right, micrograms and not milligrams.  Let’s take Maggie as our example.  She weighed approximately twenty pounds.  We were giving her 400 to 800 IU per day.  At 1.3 mg/lb would have been 40,000 IU/mg x 1.3mg/lb x 20 lbs = 1,040,000 IU.  This toxic amount was enough vitamin D at the rate of 800 IU per day to last for 1,040,000/ 800 = 1300 days or three and half years.  You can see how easy it is to get the units confused and also know that 800 IU per day is a significantly safe level.  If you drink the amount of water in one day that you would normally consume in three years – well?!

Love your pet and keep them healthy by supplementing with vitamin D and sulfur.  – Pandemic Survivor