Many Causes, One Disease, Many Cures
Resolving Multiple Factors for Disease States

Okay, this post is not for the layman in trying to resolve issues of their personal health. This post is to point researchers to a tool long used in the military and manufacturing for troubleshooting problems. The issues are multiple factor diseases. When there is more than one factor, analysis of the variance, ANOVA, only tells you that there is a statistical significance of one of the factor variances. It does not tell you which factor is causing the variance.

One of the issues that have long plagued medicine is multiple factors. In the ‘gold standard’ for statistical analysis of a drug or nutrient in how it affects a disease, typically only one factor is used. The double blind, placebo controlled trial is run. The reason for this is the complexity of the math when there is more than one factor and the understanding by decision makers of what the math model is telling you.

I can tell you from personal experience that ANOM is a very powerful statistical method to sort out both common causes and assignable causes. I was once the engineering manager for the world’s largest automotive battery plant. We made sixteen thousand batteries per day. That is over a million electrode plates per day. We of course used all the standard statistical techniques. Until ANOM was introduced, confusion continued to hold sway because the employees as well as the managers did not understand the math. When the graphical method of ANOM with the ability to compare multiple factors was introduced, we quickly achieved much higher production levels of quality product. It was also great because ANOM could be applied to either attribute data, go/no go, as well as variables data.  Also, much smaller sample sizes were needed to show significance. Clear decision making with expected results became trusted.

Here is an explanation from the SAS software statistical module: “A health care system administrator might ask which clinics in the system have a higher or lower rate of admissions than the average for all clinics. Questions of this type can be answered with analysis of means, which is an alternative to one-way analysis of variance (ANOVA) for a fixed effects model. However, unlike ANOVA, which simply determines whether there is a statistically significant difference in the treatment means, ANOM identifies the means that are significantly different. As a statistical technique, ANOM is a method for making multiple comparisons that is sometimes referred to as a “multiple comparison with the weighted mean”. Analysis of means lends itself to quality improvement applications because it has a simple graphical representation that is similar to a Shewhart chart and requires little training to interpret. This representation is also useful for assessing practical significance.”

History: “Analysis of means compares the absolute deviations of group means from their over-all mean, an approach that was initially studied by Laplace in 1827. Halperin and others derived a version of this method in the form of a multiple significance test in 1955. Ott developed a graphical representation for the test and introduced the term “analysis of means” in 1967. Refer to Ott (1967) and Ott (1975). In the 1980’s Schilling extended the application to non-normal distributions. P. R. Nelson (1982a) and L. S. Nelson (1983) provided exact critical values for ANOM when the groups have equal sample sizes. P. R. Nelson (1991) developed a method for computing exact critical values for ANOM when the group sample sizes are not equal.”

This is really great because this technique can be applied to existing data when there are multiple factors to readily point to which is the most statistically significant. You can easily decide if calcium or vitamin D is more important or better you could compare vitamin D, vitamin A, calcium, and magnesium. The thing that adds to the value of ANOM is the ability to compare the interactions of the factors. Many of the interactions will mean nothing. However, the interactions of some of the factors will be greater than any one factor. So you might find that vitamin D is great for moving the population toward health. The interaction of vitamin D and magnesium would be even greater. We can make suppositions based on our understanding of the mechanisms, but until the interactions are statistically verified it continues to be viewed as a witch’s brew.

An example of this in the nutritional community is the argument between Dr. Cannell of the Vitamin D Council and the folks over at the Weston A. Price Foundation. Dr. Cannell has held that high levels of preformed vitamin A will lead to illness because of the apparent reduction in the serum levels of vitamin D. Weston A. Price Foundation has long held the importance of vitamin A and especially cod liver oil as an elixir for health. So the question becomes is vitamin A and vitamin D antagonist or are they cofactors of each other. I personally suspect that large amount of vitamin A with small amount of vitamin D is the issue driving the assumption that large intakes of vitamin A is bad. Given two to three months for the liver to clear of stored vitamin A with a serum level of vitamin D above 60 ng/ml; I suspect health would be improved with high intakes of both vitamins. I also suspect that there is enough data currently existing in clinical trials to ferret out the answer using ANOM. One of the major advantages of ANOM is that it gives a graphical solution that is easily understood by clinicians and decision makers without having to have a complete understanding of the math operating in the background.

So the group averages of different levels of vitamin A and vitamin D may look something like this when compared to the total population. 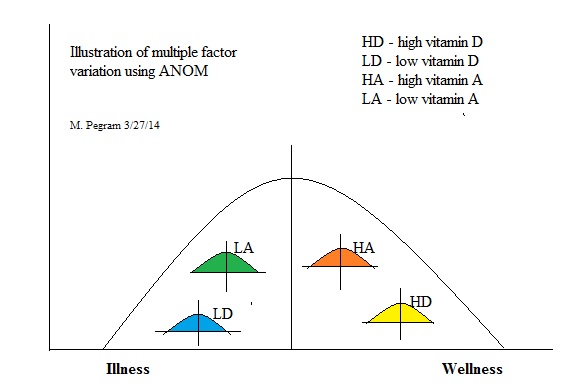 After applying ANOM you would get a graphical solution like this. This created hypothetical  example shows that both high A and high D are statically significant. But better, it shows that the interaction of vitamin A and vitamin D is even more significant. (this would make sense as the known mechanisms for growth factors, necrosis factors, and immune system improvement require VDR/RXR dimers) 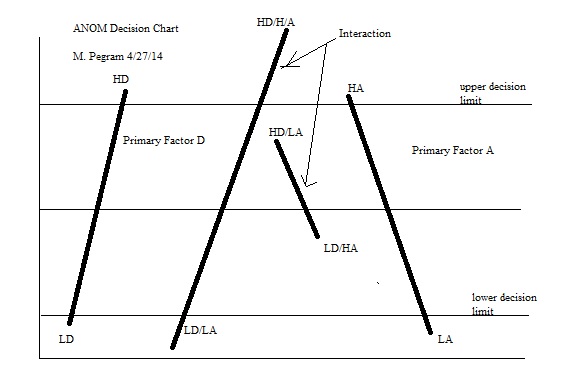 If the above ANOM is truly represented as fact, then after giving the population high amounts of vitamin A and vitamin D you would get a shift like this: 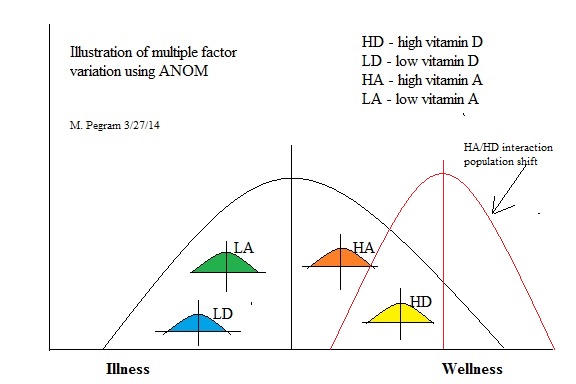 Now just imagine the power of this when analyzing a population when the levels of vitamin A, vitamin D, magnesium, and calcium are known. You would be able to see the effect of the main factors as well as the interactions of the factors and decide based on statistical significance. Or better, you could make an analysis of different levels vitamin D3, vitamin D2, vitamin A from fish liver oil, beta-carotene, magnesium oxide, magnesium chelate, calcium hydroxide, and calcium citrate all in the same study. There would be no control population required as the group averages would be compared to the average of the entire population. This is more real world than how it is done now. Also, because the interactions are so difficult to predict by individuals during the trial, the placebo effect would not be as large a factor.
The clamor over the last many years have been that vitamin D provides no consistent benefit based on meta-analyses of many studies. The beauty of using ANOM for the meta-analyses would show that dose dependence is of extreme importance. No longer would critics be able to say that vitamin D has no effect. It would be plain there are no effects at lower levels or the effects would be shown to be dose dependent for different diseases.

Imagine doing drug studies and show variations of other drugs and nutrients and interactions in the same trials with a graphical method that could be easily understood. Or imagine analyzing all of the environmental factors that are issues for a disease like autism from existing data. For this reason, the inability to show clearly which factor is most important; it is not likely that this technique will ever be adopted. I know this is a very critical statement, but it is obvious that the preference of the medical community is to keep the argument going instead of solving the problems because of the economics involved. With increased wellness in the general population, healthcare/healthcare insurance job opportunities would be significantly reduced. Our leaders have to decide which is more important, your health or the economy. I suggest that empathy for each person’s wellness would strengthen the economy to a much greater extent than creating and maintaining jobs in the healthcare sector only. It would certainly give more trust in our leadership. – Pandemic Survivor

“Think, and then plot the data.” Elis R. Ott